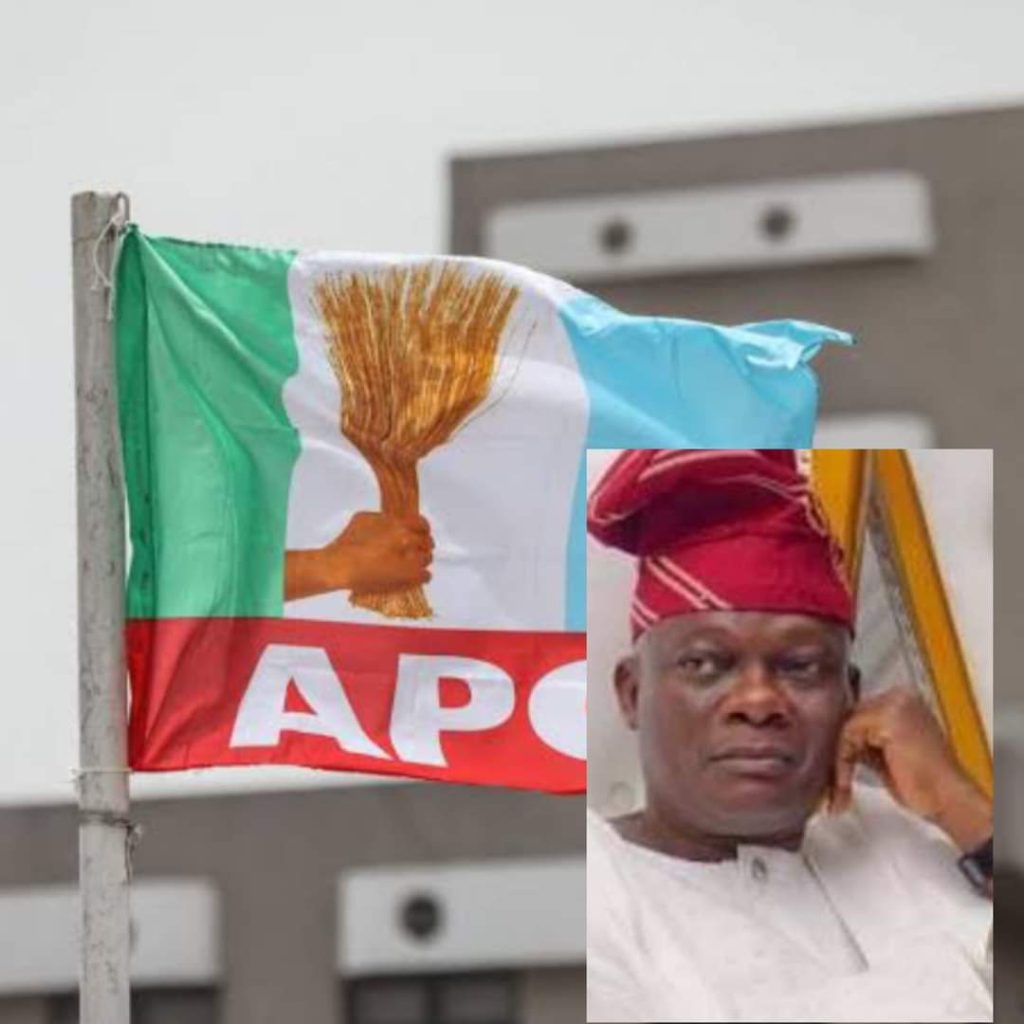 Less than two months to the 2023 general elections, the dust raised by October 2021 wards, local governments and state congresses of the Oyo State chapter of All Progressives Congress (APC) and the anger that greeted the emergence of Senator Teslim Folarin, as the governorship candidate of the party is yet to settle.

The Guardian Reported that while some aggrieved leaders and aspirants angrily defected to other parties, those who stayed back are not pretending over their determination not to work for Folarin in the March 11 governorship election.

Despite committing them to the reconciliation committee’s decision, some of them have expressed displeasure at the manner Folarin and his loyalists have been handling the campaign without carrying them along. Although, some of them confided in The Guardian that they would have left the party, if not for the emergence of Asiwaju Bola Ahmed Tinubu, as the Presidential candidate of the party. Senator Femi Lanlehin heads the reconciliation committee.

They believe that if Tinubu eventually wins the election, whatever they might have lost in Oyo State could as well be compensated for at the centre.

For instance, a Senior Advocate of Nigeria (SAN) and APC chieftain, Chief Adeniyi Akintola, who participated in the governorship primary but lost to Folarin, said though he had quit party politics, he is now supporting personalities who can win and engender development.

He disclosed that he is supporting only the presidential candidate of APC and Governor Seyi Makinde of the Peoples Democratic Party (PDP) in Oyo State.

For Akintola, only Makinde has what it takes to win Oyo State governorship contest, predicting that Tinubu will also be victorious at the election.

He disclosed that core progressives in APC, are now with Makinde, saying, “I’m not in position to stop them, I can’t bring them back, they are adults, they are all there at the stadium last Saturday.”

Akintola went as far as reeling out achievements of the incumbent governor to the electorate. “Two progressive leaders in Ogun State chapter of APC are not together, yes they are still in the same party. I said I am done with partisan politics, so, why should I be convincing someone to change his mind, I do personality, even within my local government, if a candidate is brought to me, I’m interested in those who can add value to ordinary man on the street, I’ve told my loyalists to go and mobilise support for Tinubu,” Akintola said.

The former APC governorship aspirant also debunked the rumour that he has collapsed his political structure for Folarin.

The Guardian reliably gathered that, though Folarin had severally extended hands of fellowship to Akintola after the primary, the legal luminary is obstinate.

Similarly, Oyo State Coordinator of the Tinubu/Shettima Women Presidential Campaign Organisation, Mrs. Florence Ajimobi, wife of immediate past governor of the state, the late Abiola Ajimobi, is also alleged to be working against Folarin, despite being a member of the APC.

She is said to be supporting Adelabu instead of Folarin and Kola Daisi, the Oyo South senatorial candidate of Accord instead of Sharafadeen Alli of APC.

Some loyalists of Folarin told The Guardian how Mrs. Ajimobi met with members of Oyo State chapters of the Christian Association of Nigeria (CAN) and Muslim faithful and allegedly distributed fliers of Adelabu and Kola Daisi, and other National Assembly and state House of Assembly candidates of Accord. She was accused of telling everybody present to vote Tinubu/Shettima in the presidential election but to vote for Adelabu and other AP candidates in other elections.

They also accused her of buying sophisticated telephone set for some APC leaders with the intention to participating in Folarin’s campaign. In fact, Folarin’s supporters are said to be circulating photographs of where she was allegedly distributing Adelabu’s fliers to CAN and Muslim members in her house.

But one of her aides who pleaded for anonymity dismissed the allegation as baseless.

Aside from Mrs Ajimobi, it was gathered that APC chieftains, such as Minister of Sports and Youth Development, Sunday Dare; erstwhile Minister of Communication, Adebayo Shittu; Chairman Nigerian Communications Commission (NCC), Professor Adeolu Akande and a host of critical stakeholders of the party have not shown enough commitment towards Folarin project.

The disposition of immediate past state chairman of the party, Chief Akin Oke and former spokesman of the party, Dr AbdulAzeez Olatunde, to Folarin’s ambition in the coming gubernatorial poll remains uncertain. They are neither seen with the senator or making any positive comments since the campaign started.

The Guardian gathered that what actually worsened the cold disposition was the alleged taking over of the campaign by new decampees from PDP and sidelining of the old members of the party.

Joseph Tegbe, a former governorship aspirant, who had since left for the PDP is still not happy with the Folarin candidature.

Tegbe is still angry with the manner he alleged Folarin hijacked the party’s structure and ticket, which he called “Jagba.”

Though permutation in the state is that if Adelabu and Folarin agree to work together, re-election of Governor Seyi Makinde may be jeopardised, but Adelabu has persistently said under no circumstances “will he work or bow for Folarin.”

For Tegbe, while responding to questions on why he left APC for PDP, he said, “No principled person or politician, who meant well for Oyo would remain in APC and work with or for Folarin, considering the shenanigans that characterised the congresses and primary that brought him as Oyo APC gubernatorial flag bearer.”

Tegbe said instead of staying within APC fold to do anti-party, like some chieftains are currently doing, “I left to where I can realise my ambition to serve our people.”

Part of Mrs Ajimobi’s grouses against Folarin was that when Folarin was said to be down morally and financially after the 2015 governorship election in which he contested and lost on the platform of PDP, it was alleged that former Governor Ajimobi was the one who rehabilitated him and also facilitated his return to APC.

Besides that Folarin and Ajimobi are said to be very close family members and that the senator would have been bearing same name with the former governor if not that he (Folarin) is from the female child in the family.

Mrs Ajimobi is said to be angry with Folarin jettisoning the senatorial ambition of Kolapo Kola Daisi, who is a son-in law to Ajimobi and supporting Sharafideen Alli, a close associate of former Governor Rasheed Ladoja.

Although, one of Ajimobi’s sons is the APC’s candidate for Ibadan South-West II State Constituency, Mrs. Florence to be irked that her late husband family deserved something higher.

But one of the aides of Folarin dismissed the allegations as mere rhetoric and campaign of calumny against his boss.

Yekini Olaniyi explained that the congresses and primary were contested and every contestant threw his weight into the battle, “and Folarin won in the end. It is not true that the senator has been running a one-man show as alleged. A reconciliation committee headed by former Senator Femi Lanlehin was set up to settle grievances.

“The senator has also met with everybody to appeal and sue for peace with promises to concede whatever is necessary. My plea is that we should work as a team to save Oyo from Makinde.”

The incumbent spokesman of Oyo APC, Olawale Shadare, told The Guardian there is no evidence yet on anybody involved in anti-party activities. Those who have defected and those who made public declaration of where they belong are not in our calculation.

When contacted for comment, Dr. Olatunde said he couldn’t force himself to work where he is obviously not needed or invited. Even though Barrister Shittu, who as at last year shelved his anger and promised to work with Folarin, has not been seen in any of the campaigns or make any positive comment.

Senator Lanlehin said he has done his part and submitted his report and the rest is with the party leadership.

PRESIDENTIAL candidate of the party, Tinubu, is indeed the only rallying point that can bring all the aggrieved factions within the Oyo chapter together before February 25 and March 11 elections, but he has refused, either deliberately or strategically to make any move towards the direction. The fact that Tinubu allowed Mrs Ajimobi to coordinate the Tinubu-Shettima women wing in Oyo is a strong message Folarin and his loyalists cannot pretend not to understand.

On two occasions, Tinubu had visited Oyo, first during the APC presidential primary consultation and his meeting with the Muslims community in the state last December, the former governor of Lagos didn’t raise Folarin’s hand.

Tinubu may be waiting to see how the presidential election goes before he decides on what to do. The Guardian learnt that Tinubu may also have his personal grouse against Folarin on the ground that the senator supported the Vice President, Professor Yemi Osinbajo during the party’s presidential primary.

A source close to Tinubu said, it would amount to political miscalculation now if Tinubu aligned with any of the three major gubernatorial candidates; Governor Seyi Makinde of PDP, Adelabu of Accord and Folarin of APC.

The source also said part of the reasons Tinubu may have been cold to Folarin’s candidacy is that Abuja forces that backed him to silence other contestants in Oyo also worked vehemently to truncate Tinubu’s opportunity of getting the party’s presidential ticket but for providence and courage.