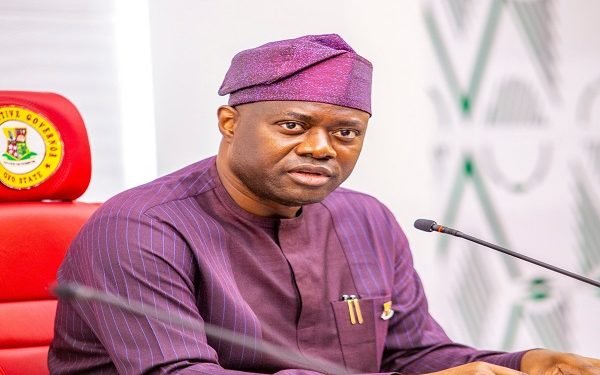 Despite unresolved political differences, Governor Seyi Makinde of Oyo state has received accolades from the national headquarters of the Peoples Democratic Party (PDP) for outstanding performance.

Deputy National Publicity Secretary of the Peoples Democratic Party (PDP), Ibrahim Abdullahi, in a statement on Sunday, said the governor’s performance is outstanding and deserved commendation.

Tagged “Makinde’s strides towards enduring legacies”, the statement described leadership as “a business of facing problems and finding solutions” noting that this has become practical in Oyo State since 2019, the sequel to the emergence of Makinde as the 6th executive Governor of the state”

According to him, Oyo State has experienced astronomical socio-economic and political development through inspirational stewardship as evidenced in the physical and human capital reforms being carried out in the period under review

“From a somewhat reticent State, deficient in attention and political flamboyance, Oyo State has suddenly become not just the centre of attraction, but a reference point and the cynosure of all eyes amongst Committee of States in the Federation” he added.

The PDP spokesman explained that “through purposeful, inclusive and well-articulated policies and programs, the Seyi-led administration is bent on rekindling the lost glory of the historic and great people of Oyo State.

“As maintained by citizens of the State across the board, Oyo never had it this good since the return of this Republic in 1999, “Abdullahi said.

“As a guest of the Governor in Ibadan during his second term Flagg-off penultimate week, I have had the privilege of reconciling NOTION with EVIDENCE. For a week, I had the opportunity of on-the-spot assessment of the ongoing reforms in virtually all sectors of the State with particular emphasis on Education, Agriculture, Health, Security and Human capital development” he stated.

Giving further testimony to Makinde’s performance, the PDP’s Deputy National Publicity Secretary said he witnessed the physical presence of the Makinde-led administration in the area of security and human capital development.

“To say that the Amòtèkun is in full force in Oyo State is to state the obvious. In every Kilometre, and in some instances Miles in-between(depending on necessity), a detachment of battle-ready and well-motivated personnel of young men and women are keeping vigil

I was to learn from the Governor that the State has over 2000 of these personnel in its employ. This compliments the 5000 Police Strength in the State who are inspired by the Governor to operate harmoniously in an atmosphere of peace, devoid of rancour, violence and outrages” he said.

According to him, the deliberate Agricultural revolution undertaken by the government through Loans to Farmers and the provision of improved seedlings, fertilizers and herbicides competes with the best anywhere in the World

The involvement of the traditional institution in the management of people is the order in Oyo State. This much was confirmed to me by the Monarch of Saki who expressed satisfaction with Governor Makinde’s approach to governance and particularly how the Governor places a premium on the Will of the people over any other considerations, using his ascension to the throne as a case in reference in the face of sentimental and other narrow tendencies