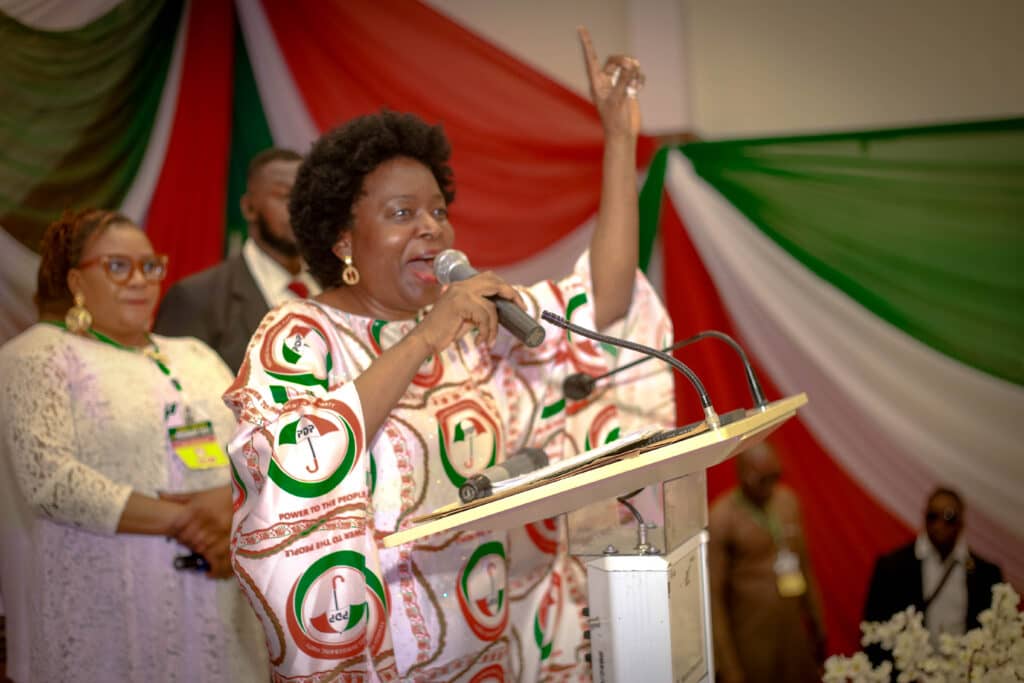 Oloye Akinjide stated this at a press briefing held in honour of the presidential candidate’s campaign held in Ibadan on Monday afternoon at the Oladapo Ogunlesi Hall, University College Hospital,(UCH) Ibadan.

Akinjide emphasized that women will be more heard and included in the government of Atiku Abubakar, noting that women cannot be downplayed in the growth and development of any nation’s democracy

“As you know in the past ,women have been the bedrocks of democracy.

” They are the ones that vote, have PVCs, we are telling them to vote for PDP

” PDP appreciates women, and Atiku Abubakar has promised that he will give 35 percent inclusion of women in his administration especially on appointments.

” He will permit us to seat at the table of power, he has appointed a women campaign Council for the first time, what a good indication ! All for independence of the womenfolk”, Akinjide said.

She added that Oyo state will never compromise the chances of PDP as Oyo State Governor,Seyi Makinde is committed to Atiku’s enthronement of presidency.

” You can see that Oyo is a PDP state, PDP governor, PDP House of Assembly and we are hoping that Oyo will also vote PDP Presidential Candidate, Alhaji Atiku Abubakar and for the governor, Seyi Makinde.

“Now we have been working very hard, remember when we had our rally in Ibadan few days ago

” All the PDP officials were there in unity with presidential candidate, which had the state chairman, Dayo Ogungbenro and state and national excos, the entire PDP Candidates bat the national assemblies, to mean business for our candidates which includes Atiku Abubakar “, she added.

Meanwhile, Akinjide regarded yet absence of the Oyo State governor,Seyi Makinde as opposition pointed at the campaign site for the presidential candidate, Alhaji Atiku last Thursday as yet a humble background to the entire political party, adding that Makinde remains solidly behind Atiku Abubakar as he officially granted site for campaign in Ibadan for the presidential candidate, then speaks unity of the party at all times he embarked on political rally

“Seyi Makinde was not at the presidential campaign in Ibadan few days ago, but that does mean he doesn’t work for Atiku.

” You know what it means, he gave his assent for the party to unite behind the presidential candidate

” And everywhere he goes for his campaign, he says people should please vote PDP for top to bottom

” The party is highly united behind all the PDP candidates”, she said.

Speaking, senator representing Ekiti South, Biodun Olujimi said only the PDP has ever brought succour to Nigerians since inauguration , adding that the time for total redemption of lost glory in the country is here , which will be realized through the PDP Presidential Candidate, Alhaji Atiku Abubakar.

” We believe the person we have picked to lead in person former vice-president,Atiku Abubakar as our candidate is a man who has treaded the path before, the man who where shoe pinches the most, a man who understands way out to woes in the country, he believes in indivisibility of Nigeria, he who believes in gender”

It would be recalled that, Titi Abubakar was in Ibadan for a southwest female town hall meeting, which was held at Theophilus Oladipupo Hall, Opposite UCH, Ibadan, Oyo state capital.

Atiku’s wife eulogized the effort of women in electioneering and urged Southwest women to support her husband to become the nation’s president.

In her speech, Titi Atiku explained her husband’s position on restructuring, women empowerment, jobs for young women, care for the aged, security, food prices and food security, agriculture, poverty, and a host of others.