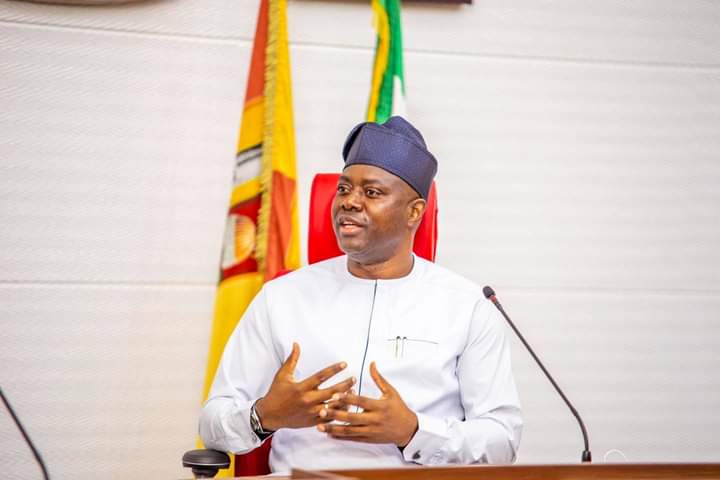 Governor Seyi Makinde of Oyo State, has declared that his administration’s determination to extract value from mineral resources abundant in the Oke Ogun area of the state, and the competitive advantage of the area in terms of agriculture to boost agribusiness and the state’s Internally Generated Revenue, IGR, remains on course.

The governor made this disclosure during a visit to the palace of the Okere of Saki, Oba Khalid Olabisi, where he met with traditional rulers from Oke Ogun Zone 1, assuring them that his government will continue to do everything possible to develop the state and uplift its people.

A statement by the Chief Press Secretary to the governor, Mr. Taiwo Adisa, indicated that the governor was in Oke Ogun to inspect ongoing works at the headquarters of the Oyo State Agribusiness Development Agency (OYSADA), Saki.

Governor Makinde, who maintained that Oke Ogun is a treasure base for Oyo State, and that his government will treat it as such, highlighted some of the on-going projects aimed at developing the zone in line with the economic expansion agenda of the administration.

According to the governor, the on-going 68-kilometre Moniya-Iseyin Road, the on-going OYSADA Complex construction, the on-going Saki Township Road construction, as well as the location of the 72 Mobile Police Squadron base in Ago-Are, were some of the efforts to develop the zone as a treasure base of the state.

Commenting on the on-going OYSADA Complex, the governor said: “I have inspected the on-going project of OYSADA Headquarters that we brought here. Though they have made some progress, I am still not satisfied. They promised that it will be completed by 10th of December but they said there were challenges with evaluation and release of funds.

Now, that is being resolved and I look forward to coming back here by the end of March. I will spend about 10 days; with the whole of government functionaries that will be here with me.”

The governor added that he has already signed an agreement that all the mineral resources in Oke Ogun should be mapped so that the state will be able to extract value for itself and the Oke Ogun region.

He said: “Apart from the fact that I came to greet Kabiyesi and other paramount chiefs that are here seated, I pray that we shall live to see the coming year and shall be a fulfilling one for us.

“I really want to appreciate you for the support you are giving to the current administration in Oyo State. It is your government too. If a state is progressing, it means the rulers at the helm of affairs are practically doing what they are supposed to do.

And 2020 in particular has been a very challenging one. We can see that all of us are wearing face masks and observing other guidelines because we are faced with pandemic and economic meltdown. So, it was really tasking. Of course, in our locality here, the issue of banditry is also another issue.

“For instance, Saki shares an international border and it is more of an international issue because we have bandits all the way from Mali that are trying to cross. Once they gain entrance into anywhere they can operate, they will stay there.

“When we inaugurated Amotekun, you gave us your support. When some bandits went to the bush at Kishi, we were able to flush them out with all the efforts of all of us here.

“So, we want to use this opportunity to say thank you to you all.”
In his response, the Okere of Saki, appreciated the governor and his entourage, stating that the Makinde administration has done many things to make people happy, especially in Saki.

He said: “On Saki Township Road, we are gradually seeing light at the end of the tunnel. The speed at which the project is being done is commendable. Really speaking, in the Oke Ogun axis of the state, we have so many things to thank Governor Makinde for.

“Many of our people also asked us to thank you concerning the way you handled the LAUTECH divorce issue successfully. We have also heard that you are planning to make it a multi-campus institution. We want to beg you that we need two campuses here in Oke Ogun.

“If you have observed, our axis is the only zone that is backward in Oyo State, which is not supposed to be so. I am saying this because we are blessed with many mineral resources. We just want someone that can support us a little bit. And who will? It is actually the government.”

The meeting had in attendance the Speaker of the House of Assembly, Hon. Adebo Ogundoyin; the chairman of the Oyo State Advisory Council, Senator Hosea Agboola; Deputy Chief of Staff, Hon. Abdulmojeed Mogbonjubola; Commissioner for Establishment and Training, Alhaji Siju Lawal.

Others were the Director-General of OYSADA, Dr. Debo Akande; the Director-General, Due Process, Ms. Tara Adefope; Senior Special Assistant to the Governor on Sustainable Development Goals, Hon. Kunle Yusuff; full-time Commissioner in the Local Government Service Commission, Hon. Oyesina Oyedeji, among others.